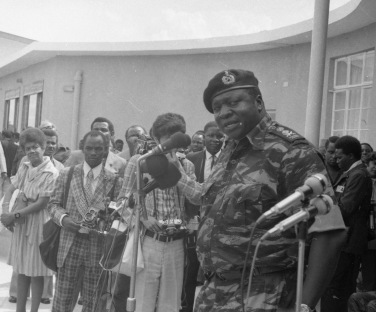 Over the course of his eight years as president of Uganda Idi Amin was the subject of hundreds of thousands of photographs. A dedicated and talented team of photographers under the Ministry of Information followed Amin, taking pictures of the many occasions when he appeared before a public. It was an exceedingly perilous job. We know of one government photographer—Jimmy Parma—who was executed by Amin’s men as punishment for his pursuit of unapproved photographic subjects.

For decades it was thought that photographs that the men of the Ministry of Information had made were lost to posterity, destroyed during the tumult of the early 1980s or misplaced during subsequent relocations of the Ministry’s archives. In 2015, though, researchers and archivists at the Uganda Broadcasting Corporation uncovered a filing cabinet full of thousands of photographic negatives. Each envelope was carefully labeled with information about the date and subject of the photograph. In all, there are 70,000 negatives, dating from the late 1950s to the mid-1980s.

So far as we know, none of the photographic negatives in the U.B.C. archive have been published or displayed in any public venue. The vast majority of the negatives were never printed. This is, until now, an unseen archive. 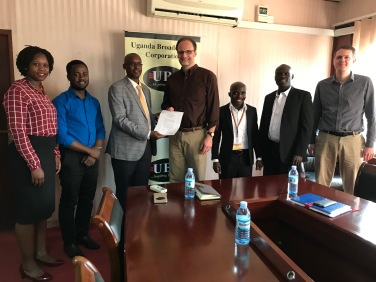 In January 2018 the U.B.C. launched a project to digitize this important collection. With funding and technical support from Makerere University, the University of Michigan, and the University of Western Australia, the dedicated team of archivists has digitized 25,000 images to date.

In May 2019 Peterson–with colleagues Richard Vokes, Edgar Taylor, and Nelson Abiti–organised an exhibition at the Uganda Museum drawn from the U.B.C. photographic collection. ‘The Unseen Archive of Idi Amin’ consists of 200 photographs drawn from the much larger collection held by the U.B.C. All of the photographs were made to glorify President Amin, elevate the accomplishments of his presidency, and make visible the iniquities of the enemies – both real and imagined – that his government pursued. The photographs testify to the passions and enthusiasms that his government cultivated. The exhibition also includes many pictures of everyday public and cultural life in 1970s Uganda. It provides a unique insight into how the Amin years were experienced by ordinary Ugandans, how people worked, played, and loved during this time.

The exhibition was on show in Kampala until the end of 2019. In 2020 the curators placed it at several regional museums around Uganda: at Soroti, where the Uganda Museum has opened a new building; and at Arua, Idi Amin’s home town. In 2021 the exhibition will be on show at Mbarara, at the Igongo Cultural Centre. Thereafter the curators hope to show it at museums in England, Australia, and the United States.

There has been extensive media coverage around the exhibition at the Uganda Museum. The exhibition opened in mid-May 2019 with a series of televised panels featuring people whose lives were intertwined with the Amin regime. The opening panel featured politicians who served in Amin’s cabinet; on another night, journalists who covered his government discussed their work; on a third evening, people who had lost loved ones during those years discussed their experience. The curators have written about the exhibition in The Conversation, at the website Africa Is a Country, and in an academic essay in Comparative Studies in Society and History.

Press reports and reviews of the exhibition have been published in the Monitor (Uganda), the New Vision (Uganda) (here and here), the Independent (Uganda), the East African (Kenya), the Smithsonian Magazine (USA), de Volkskrant (Denmark), 15min (Lithuania), The Guardian (U.K.), The Times (U.K.), and The Economist (U.K.) and The Los Angeles Times (U.S.).

A selection of photographs drawn from the larger U.B.C. archive will be brought out in 2021 by Prestel Publishing, under the title The Unseen Archive of Idi Amin: Photographs from the Uganda Broadcasting Corporation.